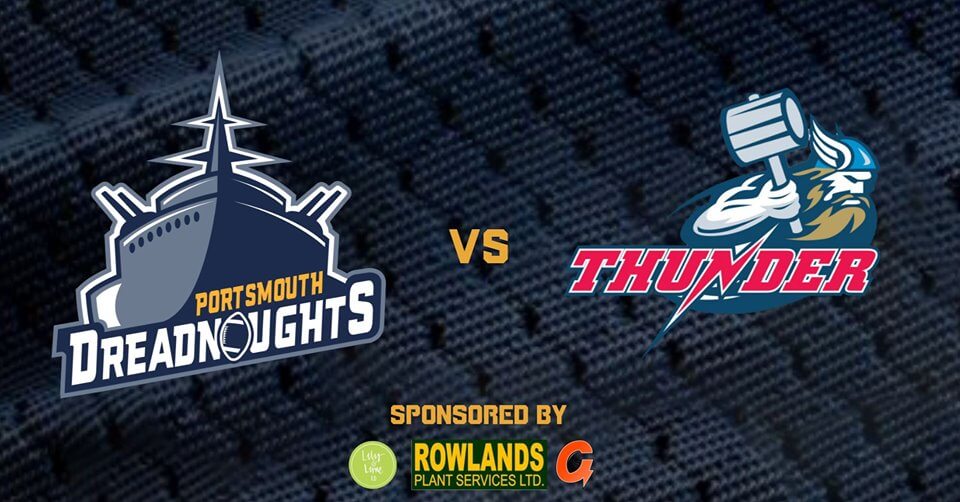 PORTSMOUTH Dreadnoughts’ head coach Luke Head-Rapson is calling on his team to show discipline and heart in their next game as they suffered their third defeat of the season. The Hooks Lane side lost 42-7 against Sussex Thunder in Division One last week.

Head-Rapson said mistakes by his team helped the visitors to victory in the Dreadnoughts’ first home game of the year. “They were better prepared and more physical than us,” he said. “We weren’t really prepared for their size or strength and in the end, they were better on the day.

“We made tonnes of mistakes, penalties and errors, there was a lack of discipline.”

Sussex opened the scoring with a 21-yard throw to the endzone and an extra point in the first quarter. They made it 14-0 after a 48-yard run and another conversion in the second quarter.

Later in the half, the Dreadnoughts were able to capitalise on a Sussex mistake. A punt by the hosts was fumbled by the receiving team and Harry Simister jumped on the ball to give his side a first down on the 40-yard line.

On the next play, a long throw down the field by quarterback Stu Rees put the Dreadnoughts on the four-yard line. With the home side on fourth down and goal, Rees threw the ball to tight end Jack Flemming who was in the endzone. Kicker George Evans converted the extra point to make it 14-7.

There was just enough time in the half for Sussex to extend their lead to 21-7 after a 12-yard run and a successful extra point attempt. After the break, Sussex showed their strength and pulled further ahead thanks to a short run into the endzone.

The Dreadnoughts tried to find a way back and found themselves on first down and goal but the visitors’ defence held firm. With the game clock ticking down, Sussex ran the ball in on fourth down and goal to make it 35-7.

Then, with 22 seconds to go, they intercepted the ball from the Dreadnoughts offence. The pick six saw Sussex run down the field for their final touchdown and extra point.

Head-Rapson admitted his side need to be better prepared for games in Division One. He added: “Obviously, with us being promoted we didn’t think we were going to win every game but we have to try and win at home. “Practice and preparation is key. We need to take advantage of the opportunities we get and play more as a team. “Once we get some team cohesion and everyone is working towards the same goals we will get much better results.”

The Dreadnoughts face Berkshire Renegades at home on Sunday – a team they beat 38-27 earlier this month. Head-Rapson said: “The next game is going to be tough. We have already beaten them this season but we have had a couple of hard results since. “It is all on us, we have already proven we’re good enough to beat them, it just depends whether we can do that again. “

We need to play with discipline, effort and heart. If we do play to the quality of the team then we will have a positive result. I am confident the players can do it.”