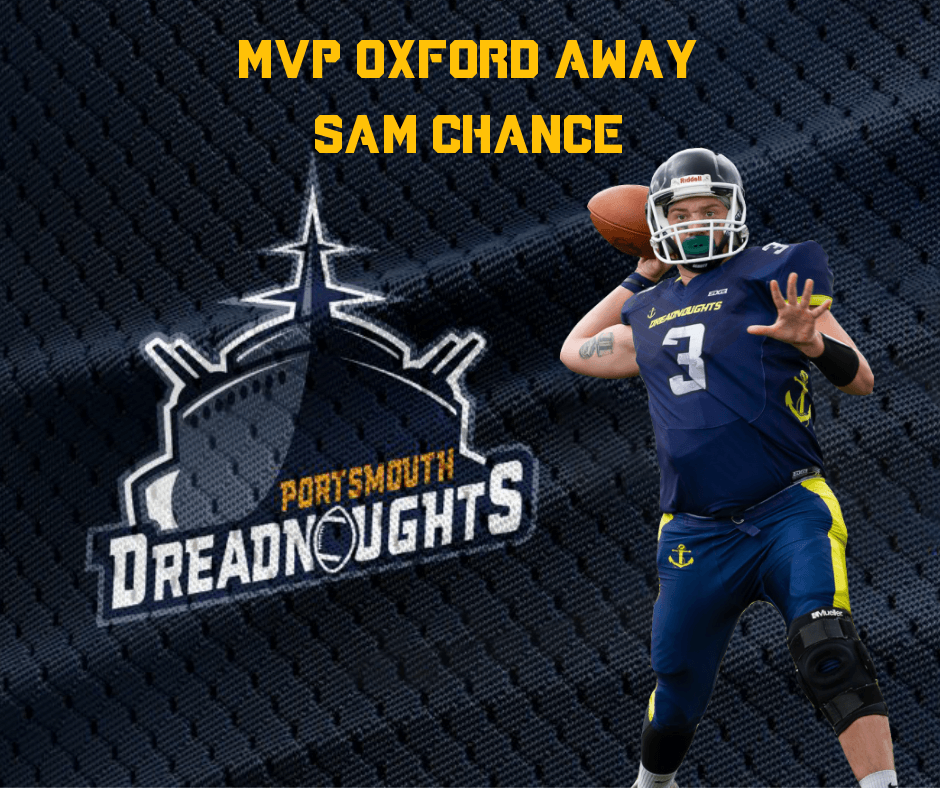 Making a reappearance as MVP is Quarterback Sam Chance, following his huge performance in the 36-17 win over the Oxford Saints.

Sam, thanks for speaking with us and congratulations on being named MVP. This is your second MVP award in three starts, how does it feel to be recognised by the coaches for your performances?

It’s always nice to be recognised for your performance in whatever sport you play. This only being my third season as a QB and to be MVP in 2 out of 3 games is a real honours and I’m very happy that I’m making a difference on the field

You set club records for passing yards in a game (383) and passing touchdowns in a game (5), what led to such a huge performance?

On my part it’s down to preparation. The coaches have really helped with my ability to break down tape and identify coverages and looks from opposing defences. I like to watch a lot of tape as it makes me feel couldn’t going into the game. Also have a positive attitude, the second heads start going down because of mistakes is when games slip away so ensuring that I’m positive and lead from the front. But it’s also down to the rest of the offence. The O-line with limited personnel done a fantastic job in dealing with a big front 7 unit giving me time in the pocket. The receivers ran their routes excellently and played smart adjusting to the coverages and making RAC yards. And also the RB grinding out yards as they always do. Without all the other boys them stats wouldn’t have been possible

How do you feel in the offense following your third game at the helm?

I feel very comfortable, Coach Dave and Coach Cliff have worked a lot with me in working through my progressions and staying relaxed in the pocket, and it’s had a positive influence on my game. I’ve always considered myself to be a half decent leader so knew it would emerge eventually, but I’m feeling confident and proud to be part of a great offensive unit

Are you looking forward to the challenge of taking on Solent in the next game.

Of course, Solent have had a great season so far as they always do, however there’s no doubt in my mind that it is a winnable game. We will prepare as we always do for any opponent and go out on to the field all guns blazing. Personally it’s the game I most want to win as Solent have a few coaches and players I have spent a few years around so it’s definitely a fixture I want to win

It was announced today that Coach Dave Gibbs, the Portsmouth Dreadnoughts Offensive Coordinator will be taking up the same position with the University of Portsmouth Destroyers, where you are also the starting QB. How do you feel about this appointment?

I’m very happy that Coach Dave has been appointed the new OC at the Destroyers. He’s an excellent coach who has a lot of knowledge about the offence and working alongside Coach Cliff I am confident that the two of them will help our offence fulfil our capabilities. We have an offensive roster filled with talent and I’m sure that with Dave coming in he will help us achieve great things

We caught up with OC Dave Gibbs after the game, who had this to say:

There were so many players who put in an outstanding performance against the Saints that it was hard to choose an MVP, but Sam stood out with his composure, ball placement and downfield accuracy.

We had to rely on the passing game to get the win this week, and Sam and the receivers stepped up. I am confident that we can carry this forward for the rest of the season!

The Portsmouth Dreadnoughts’ next game is at Home vs the Solent Thrashers on June 30th at Havant RFC.

The full list of MVP Awards from the game was: