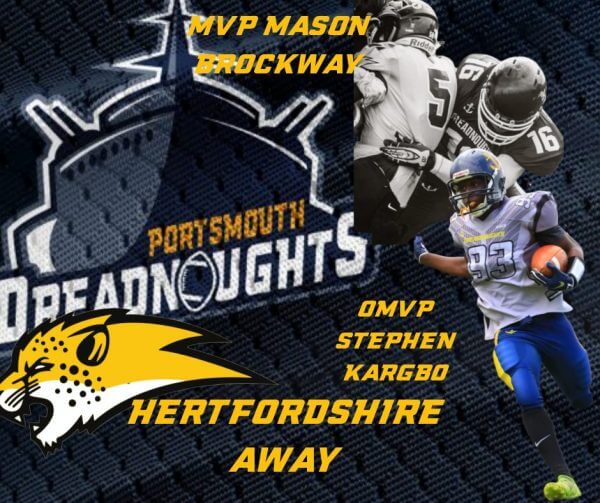 So last Sunday the Dreadnoughts went up Hertfordshire to face a tough Cheetahs team who were coming of some dominant performances in Division 1. The game was a closely contested with Hertfordshire winning the game 13 – 8.

A big positive from the game was the emergence of some the Dreadnoughts 2019 Rookie class, with Team Most Valuable Player being awarded to first year Mason Brockway and first year Stephen Kargbo picking up Offensive MVP.

We have talked with both Mason and Stephen and the interviews are below. Before we get to that, if you are reading this and are still unsure whether or not you want to try American Football, or have a friend that has been showing interest. The fact that 2 of the 3 games a first year rookie with no previous American Football experience has won Most Valuable Player on 50 + man roster shows the difference you could make by coming along and putting the work in. Please visit our recruitment page  and hopefully soon you will be showcased on our social media as an MVP!

Congratulations on being named Team MVP in the Hertfordshire Away game.
This is especially good as you are a rookie, and this is your first game as a starter. Please tell me what that meant to you?

Thank you for the congratulations, I was so ecstatic when I was told I was awarded.

What made you want to try American Football and how has the reality of it compared against your expectations?

I’ve always wanted to play American football but never had the time and didn’t really know where to look to start. My brother got me into it because he was also looking to play so we sort of went through it together. The game is much more fun to play then to watch. In the first couple of training sessions it was a huge eye opener for me, I’ve never realised how many components there is to the game.

You play Corner Back, why did you choose that position and what about your abilities do you feel suit you to playing it?

To be completely honest I had no idea the roles of a corner back, all I knew is that it was part of defence and that’s the side I wanted to play. I’ve just grown to love the position.

You play other sports to a high level, could you please tell us about those and in what way American Football is different?

I also compete in judo and fastpitch softball for GB, and I can honestly say the team is what makes the sport so enjoyable.

Thank you Mason, good luck in the rest of your season!

Head Coach Luke Head-Rapson has the following to say about Mason’s performance:

For a player to win an MVP in his third game of football is a tremendous achievement. Mason was outstanding against Herts whilst playing almost every defensive snap of the game, he thoroughly deserved the recognition and I look forward to many more MVP level performances from him going forward.

Congratulations on receiving Offensive MVP for the Hertfordshire away game. As a first year rookie who is new to the sport how does it feel to be recognised for your standout performance?

First of all, I want to say thanks. It feels great to be recognised. It shows that hard work pays off.

What led you into American Football and how have you found it so far?

What I love about American football is the fast pace and how every teammate has to work together to achieve one goal.

I understand you compete in athletics also, how do you find the team atmosphere in comparison to a sport where you compete as an individual?

In athletics it’s quite different. Everything is up to you pretty much. In football any mistake will affect the whole team.

As well as OMVP you won ‘Play of the Game’, please talk us through this from your perspective?

Getting play of the game was quite exciting. After getting the ball, I wasn’t thinking as much. It was more about reflexes and trying not to get hit.

What are your goals for this season?

My goals for the season are to improve as much as possible and become a better teammate.

Thank you Stephen and good luck for the rest of the season!

Offensive Co-coordinator Dave Gibbs gave us a snippet on Stephen’s performance to date:

Stephen’s development has been a pleasant surprise and a huge boost to our offense. His speed adds an additional factor that defenses have to account for, and I’m sure there are more big plays yet to come!

Fantastic stuff for the rookies there, and it is great to see them both underlining the importance of team. The Portsmouth Dreadnoughts are a family and everyone who is willing to show up and put the effort in is treated as such. We are all very excited to see how all our rookies develop as we build towards bigger and better things.

A quick reminder that your Portsmouth Dreadnoughts have their first home game of the season this weekend to another hard division opponent in Sussex Thunder. We would really appreciate the support so come along to, Havant RFC, Hooks Lane, Fraser Road, PO9 3EJ, where you can sit in the stands and enjoy a fully stocked bar and cheer on the Portsmouth Dreadnoughts. Kick off starts at 14:30 pm.