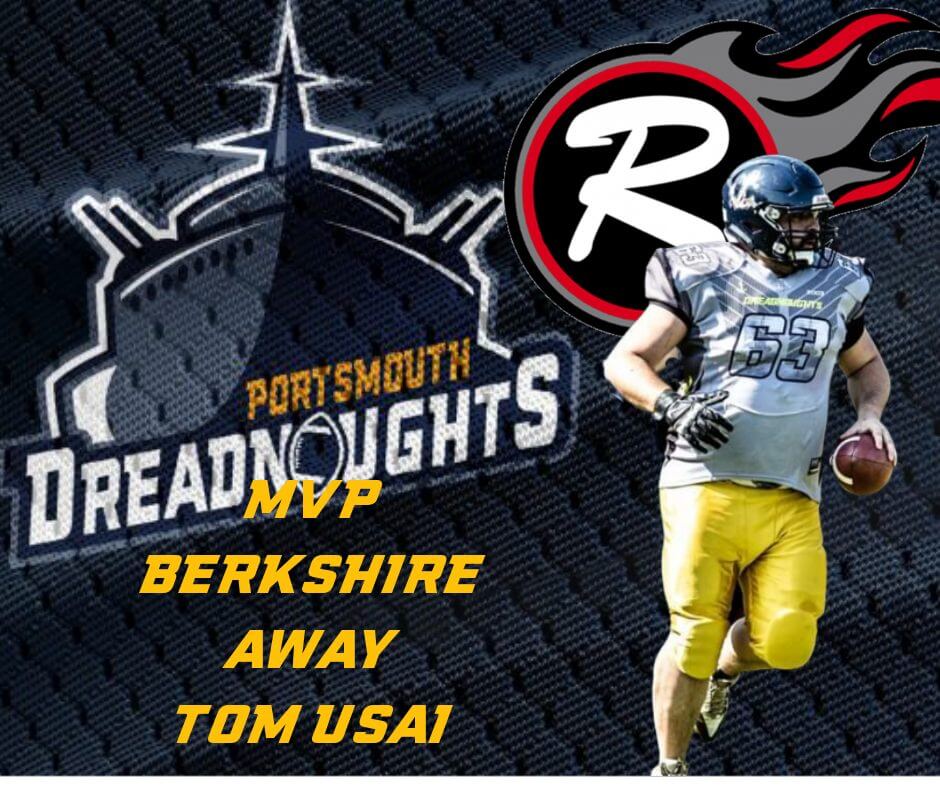 We caught up with Team MVP Tom Usai about being named MVP for our first Division 1 win!

Hi Tom,
Congratulations on being voted Most Valuable Player for Portsmouth Dreadnoughts first win in Division 1, please tell me how it feels to be voted MVP and what about your performance do you feel led to that decision?

Feels great to be voted MVP and be recognised for a performance especially getting a shout out for the OL. I don’t know why I stood out to the coaches as on the OL it comes down to all five on the field to make things work but I’m thankful nonetheless

The Dreadnoughts were 14 – 0 down in the first half of the game, did you feel confident at that point that you could grind out a win?

Being down by two scores is tough but I think we all believe in the system and after successful drive to begin with knew we were capable of scoring and getting back in contention. After that it was just keeping our foot on the gas and trying to seal the win that carried everyone through

The O-line were dominant and your performance really stood out, please let our readers know what it takes to play O-line and what it was about this group that led to such a dominant performance.

To play OL and be good at it, it’s about attitude. Attitude attitude attitude. You have to put the work in on and off the field and when you step on the turf you have to be in a mindset where you believe you are gonna dominate the man over you. You can have all the technique but if you don’t want to be there it’s better if you aren’t.

Next week you have a tough away fixture at Hertforshire who beat the Dreadnoughts in last years Divison 2 final. Do you see this as bit of a grudge match?

Absolutely a grudge match, we lost to them in our first ever finals and have become real rivals over the last couple of years regardless of result it’s gonna be a great game.

Thanks Tom and good luck next week.

And as if making defences know he’s their Daddy on the field wasn’t enough, he has recently become a Dad for real, so congratulations to Tom.

We asked Offensive Line Coach Brandon McCoy what he made of Tom’s performance.

Against the Renegades on Sunday, Tom was pivotal to our success. His speed and strength was no match for their defensive line as he had multiple key blocks. Also, his passion for the game brought out the best in the entire line and allowed us to move the ball consistently down the field.

Hopefully Tom and the Dreadnoughts can continue their good form next Sunday 5th of May in their away fixture to Hertfordshire Cheetahs.