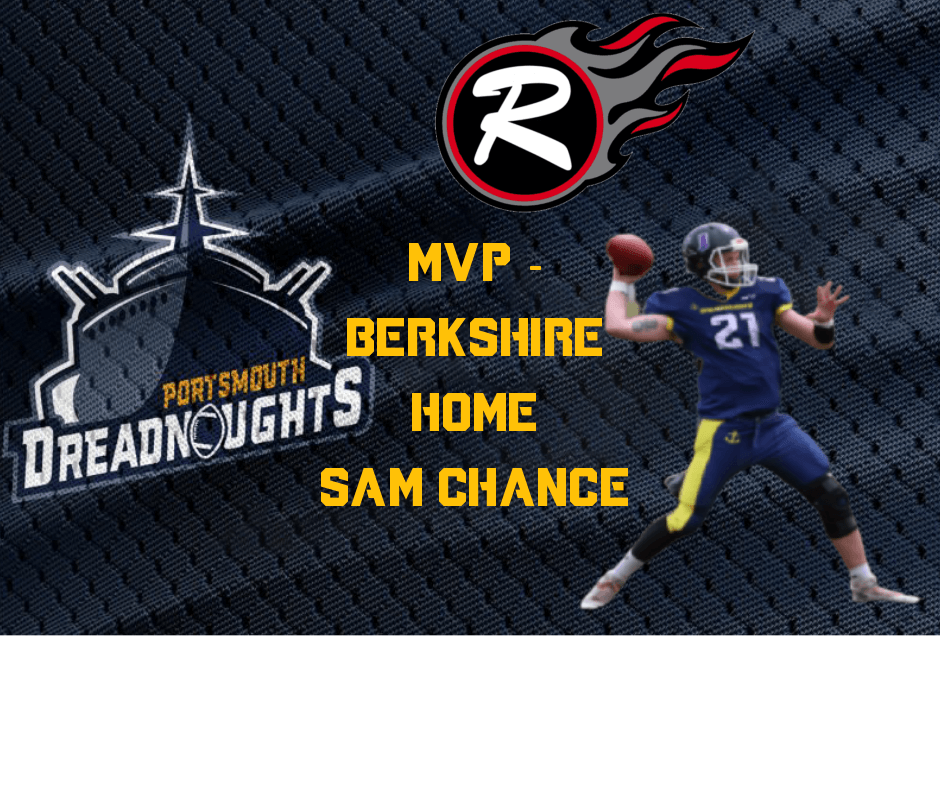 The Portsmouth Dreadnoughts played their home fixture at Gosport & Fareham Rugby Club where we managed to defeat the Berkshire Renegades in a 47 – 0 victory.

Playing his first game for the Dreadnoughts and starting at Quarterback was University of Portsmouth Destroyers QB Sam Chance who was awarded Team Most Valuable Player for the game!

Hi Sam, Thank you for talking to us and congratulations on being named Team MVP for our home game against Berkshire Renegades.

Now this was your first time playing for the Portsmouth Dreadnoughts where you were also asked to play arguable the most important position on the field (Quarter Back) and you won the game 47 – 0 and walked away with team MVP, how does that feel?

To be awarded an MVP is a real honour and a very proud moment, and to be awarded it after my first game as a starter makes it that much more special. However that win wasn’t just down to one player it was down to the whole team, Offence and Defence. Without their efforts the win wouldn’t have been possible.

You threw 3 touchdowns and ran for one yourself, what was your personal highlight from the game?

As the starting QB for Portsmouth Destroyers how did you find the move to summer ball as opposed to uni ball?

Whether its Uni Ball or Summer Adult ball I always like to go into a game with a positive attitude so the transition wasn’t too difficult. I think the biggest difference is playing in the heat, we rarely experience that during the Uni ball season, we’re used to the cold, rain and mud, so playing with a dry ball in perfect conditions definitely had a positive influence on my overall game, but wearing pads and a lid in the heat will take some getting used too.

There are a lot of your Destroyers team mates who play for the Dreadnoughts, would you encourage more uni players to take up summer ball?

Definitely, I would encourage every single university player to play some kind of summer football. Having another season under your belt could be the difference between starting or sitting on the bench, and will only have a positive influence on your game.

You have only been playing 2 years, please tell us more about how and why you got into football and a bit about your journey so far, also why you picked Quarter Back and what you enjoy so much about that position?

I had played rugby for around 10 years and achieved lots of things i’m very proud of, but when i came to uni it was a new start and the opportunity to play a new sport that is growing rapidly in the UK. In the years building up to coming to University I had began to start watching highlights of the NFL games and playing madden on the Xbox and i started to love watching the sport so it was an easy decision to join the Destroyers. I started out in first year as a Wide Receiver, and then on tour someone saw me throwing a ball and suggested I tried out at Quarterback. I then spent the summer working on my arm and knowledge of the offence getting ready for the next season. The work paid off and i was starting game #1 of the season. I’ve always considered myself to be a half-decent leader in any situation whether it be on or off the field so playing QB is perfect. I enjoy having the opportunity to lead my team mates and friends on the field and play along side them week in week out.

You have recently had an injury which has meant you have come to the Dreadnoughts later in the season, what are your goals for the rest of the season?

Any time spent out with injuries is very tough and frustrating, not being able to train and play ball with the boys is very challenging. My goal this season is to help the team get as many W’s as possible. The talent on the team is excellent and has been showcased throughout the season. I just want to be able to do my bit and help them get some more Wins and try and get to playoffs. The coaches and the boys have been fantastic in welcoming me to the club and i’m very honoured to be trusted to go out and lead the offence on the field, so to get to play offs would be a great way to end my first season with Dreads.

We look forward to watching Sam play and wish him luck in the rest of his season.

We asked Offensive Co-ordinator Dave Gibbs and how he found Sam’s performance on Sunday.

“Sam had an excellent debut and led us to one of our highest offensive outputs of the season. I look forward to seeing him continue to develop on the field.”

You can watch Sam lead the Dreadnoughts offence again this Sunday at our home ground at Havant RFU as we welcome Hertfordshire Cheetahs. Please come down and support your Portsmouth Dreadnoughts.