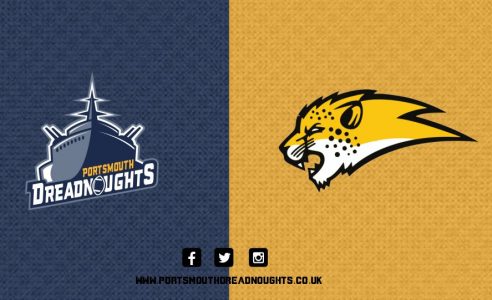 THE Portsmouth Dreadnoughts are hoping to capitalise on a two-week break as they look to bounce back from defeat at the Hertfordshire Cheetahs.

The Hooks Lane outfit lost 13-8 in the Division One game after going behind in the third quarter.

Dreadnoughts head coach Luke Head-Rapson said his players gave everything they had in a closely-contested game.

“Moving up a division means we are going to face tougher opposition and be tested more than we have been in previous seasons,” he said.

“These close games are pushing us which is good but ultimately we want to be winning them.

“At the half we were in a position where we should have been able to go on and win it.

“But having three games in four weeks has been hard. It has left us undermanned in some positions, and although the players stepped up with many playing every snap in the game, overall we weren’t good enough.”

Despite the offences finding first downs and spending lengths of time on the field, the first two quarters were dominated by turnovers and punts.

The hosts thought they had got the opening touchdown half way through the second quarter but the 42-yard run into the endzone was pulled back for a holding penalty.

After the break, they did take the lead. They ran the ball 46 yards downfield for a touchdown and converted the kick for the extra point.

Hertfordshire quickly extended their lead when their quarterback threw the ball 26 yards to the endzone. Their effort for an extra point was blocked making the scoreline 13-0 going into the final quarter.

Late in the game, the Dreadnoughts started to up their tempo. Quarterback Leslie Qwesi handed off the jet sweep to wide receiver Stephen Kargbo who ran 75 yards for a touchdown. The visitors went for two points with Qwesi running the ball into the endzone.

The Dreadnoughts will play their first home game of the season against Sussex Thunder on May 19 and Head-Rapson is calling on his side to get a result.

He added: “Sussex are are one of the best teams in the division but we’re at our home ground so hopefully we can get the result. “Having two weeks means we can rest and prepare for the game properly.

“They are a big, strong team so we have to match them and play to our full capability. We have to be physical, better disciplined and take advantage of the opportunities we get.”

Most Valuable Players for the game were: