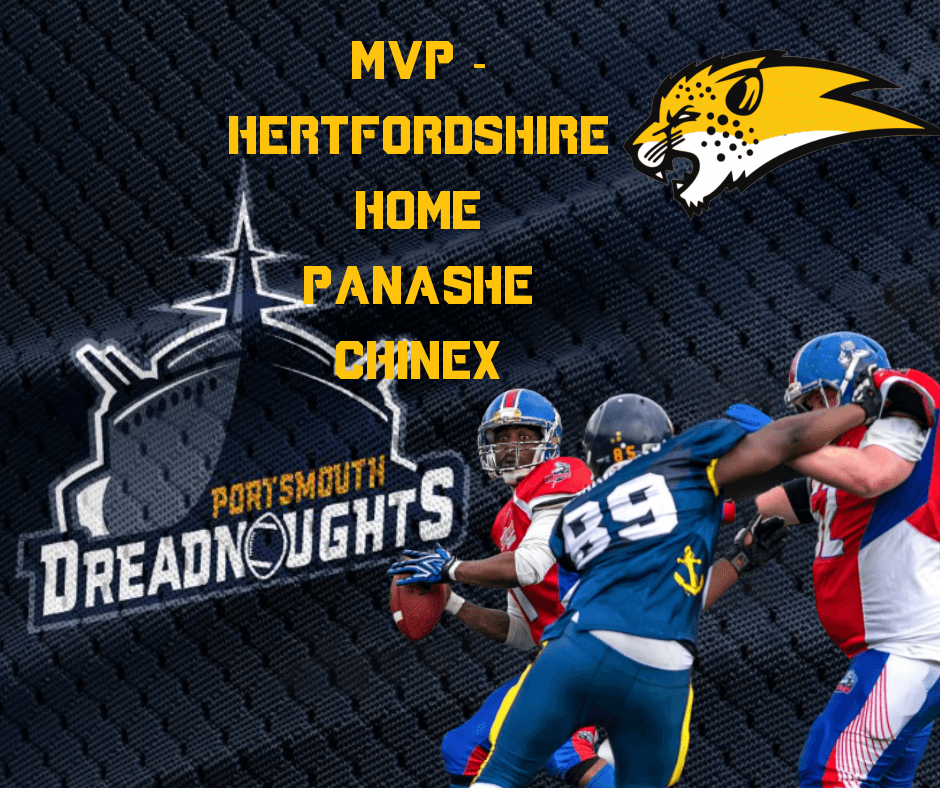 The Portsmouth Dreadnoughts fought hard on Sunday but unfortunately they did not get the desired result, with 19 – 21 defeat at the hands on the Hertfordshire Cheetahs. There were many great individual performances but the stand out player and voted team MVP was first year Dreadnought Panashe Chinex.

We spoke with Panashe to talk about the game and to get to know him a bit better.

Congratulations on being named Team Most Valuable Player for the home game against the Cheetahs, how does it feel to get your first (hopefully of many) Dreadnoughts MVP?
Despite the result it is a great feeling to be recognised as MVP. It was certainly a confidence boost for myself and just goes to show that hard work does pay off. I’m glad I got to provide an MVP worthy performance in front of the Home crowd. I could not have done without the help of my teammates, everyone gave their best effort against the Cheetahs. I also feel motivated to improve and continue playing well so I can be recognised as MVP again in future games.
I really do hope this is the beginning of many more, but more importantly, the team gets their win back!

This is your first year with the Dreadnoughts, it has been good watching you improve, how are you finding things with the team?

I’m enjoying my time as part of the Dreadnoughts. Everyone has been very welcoming including the supporters. I have managed to settle in very well, I feel like I have been a part of the team for a long time. The team culture is excellent, we all look out for each other, the coaches are very supportive, and it feels like one big family.
I hoped I showed that in my performance?
Thank you for inviting me into the family!

For those that don’t know you very well please can you tell us a bit about yourself, both personally and how you found your way to American Football and eventually with the Dreadnoughts?

I’m 22 born and raised in Zimbabwe before moving to the UK at the age of 15. I started off playing Basketball before deciding to pursue Rugby whilst completing my education in London before going on to university in Hertfordshire. After playing rugby for a long time I was introduced to American football at University, I decided to try it as it was a niche sport and I liked the challenge but found myself falling in love with the sport and playing 3 seasons for the Hertfordshire Hurricanes. I then went on to play 1 season with the London Blitz, reaching the National finals which was an amazing experience especially for me as I was still new to the sport. After taking a season off and moving down South I wanted to play American football again, so I researched a few teams but after attending a training session with the Dreadnoughts I was convinced that this was the team I wanted to be a part of.
The Dreadnoughts remind me why I fell for American football in the first place. The game is exciting, but the team is more important. It’s a great bunch of characters that I fit in well with.

You play Defensive tackle, why did you choose that position and what do you enjoy about it?

Honestly, I would have never thought that I would ever be playing as a defensive tackle. I started playing Nose tackle for the Hurricanes for all 3 seasons. I tried out DT for the Blitz and enjoyed the position, so I started to focus my training for that position and luckily, I managed to secure a DT spot for the Dreadnoughts. Playing DT is one of the most important and fun positions on defence. There is a lot of opportunity to make plays and be a key member of the defensive side of the team, after all defence wins games so that is definitely where most of the fun is.
Being at the core of defence means I can support the offensive guys. They work damn hard to get our points, so I am going to make sure I work damn hard to keep those points. I don’t ever want to let the team down.

What advice would you give to those who are potentially interested in playing American Football but haven’t yet given it a go?

My advice to anyone thinking about trying out American football is that do not be afraid to take the leap of faith and try out a new challenge. Anyone can play the sport regardless of your athletic background. There is a lot of support so learning the sport becomes easier and if you are seeking a thrilling adventure then American football is the sport for you. I would urge a lot of people to try American football especially now when the sport is growing in the UK, there is a lot of opportunity to progress within the sport and get recognised, who knows you could even end up in the NFL.
There are moments of frustration, annoyance, disappointment etc. But it’s great to experience that on the field, so that you are prepared to deal with these matters off the field. It’s not only about playing a game. It’s about preparing for life.

Thanks Panashe, best of luck with the rest of your season and if last Sunday was anything to go by, we will hopefully be doing another MVP interview with you!

Excellent interview with Panashe there which really encapsulates the family feel of team sports, the excitement  of American Football along with the effort needed to be recognised by your peers and coaches.

The Portsmouth Dreadnoughts are away next Sunday 16th of June 2019 to Oxford Saints.